Nigeria, Chile and Vietnam are among countries now backing a stronger climate goal for international shipping, but cost concerns remain

Nigeria, Chile and Vietnam were among the countries calling for a net zero or zero carbon goal at the International Maritime Organization’s environmental committee meeting.

Campaign group Seas at Risk said there is now a clear majority in favour, which gives a good chance of getting the target agreed at the next meeting in June 2023.

Shipping is responsible for around 3% of global emissions. This share is expected to grow under the industry’s target to halve emissions from 2008 levels by 2050, as sectors like electricity generation clean up faster.

Like international air travel, international shipping is not mentioned in the Paris Agreement and is not covered by most countries’ climate plans.

According to the Seas at Risk campaign, 32 countries spoke in favour of net zero or zero-carbon and 10 spoke against. The group said in a statement this represents a “dwindling opposition” as,  at the last meeting in May 2022, 24 countries were opposed.

Developed countries like the USA and most of Europe supported zero carbon. So did several island nations that are threatened by sea level rise like the Maldives and Marshall Islands.

Marshall Islands negotiator Albon Ishoda said: “We are the world’s most climate vulnerable state and we are calling for a 1.5[C]-aligned policy. We are among the many, many that will be sacrificed as collateral damage in this emergency which we have neither asked for or caused.”

He added that an 80% reduction by 2040 and zero emissions by 2050 were “the limits science is telling us are the minimum needed to keep a 1.5 agenda on the timetable. All the science and the progressive industry are telling us this is technically achievable and feasible.”

Large emerging economies like China, Argentina and the United Arab Emirates warned against adopting the target.

South Africa’s negotiator, who cannot be named without prior consent under IMO rules, said it could increase shipping costs and distort trade, particularly for developing countries. These costs would likely be passed on to consumers, they said.

India’s negotiator highlighted uncertainty around what green fuels will replace fossil fuels in ships. “We should not get carried away with mere global calls without any scientific evidence to back it or actionable solutions to achieve it,” their representative said.

Brazil’s negotiator told the IMO meeting room that “setting a very ambitious goal is not analogous to achieving it” and “such levels of ambition seem technically fragile and politically risky”.

A report commissioned by the UK government found that switching to cleaner fuel will increase costs, especially in the short term. By 2050, costs will be about a third higher. The report says that  this increase is no higher than those caused by fluctuations in the price of fossil fuels. 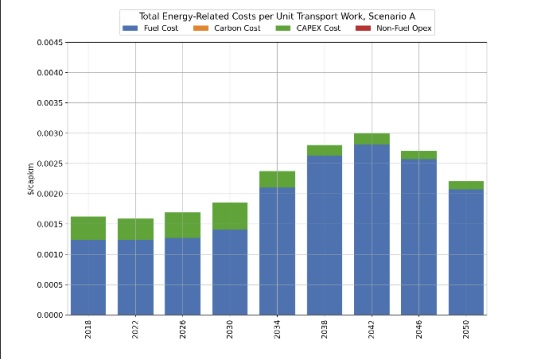 The energy-related cost of shipping per unit of transport supply if all the carbon costs are reinvested in the industry and shipping goes to near zero emissions by 2050 (Photo: Umas/E4tech/Screenshot)

One of the report’s authors is Tristan Smith from University College London. He told Climate Home that the cost increase means there’s “a good case for some support for developing countries and especially small island developing states and least developed countries during the transition”.

An October 2021 report by McKinsey found that meeting a target was technically possible but which clean fuel to use was not clear. Any low-carbon fuel, like hydrogen or ammonia, is likely to raise costs for shipowners. “With low prices and already established supply chains, fossil fuels are tough competitors to beat,” it found.

One delegate, who did not want to be named, told Climate Home the holdouts were looking for concessions that could include exemptions or discounts from carbon prices for ships calling at their ports. Finance to upgrade ports or a priority share of carbon market revenues are other options to sweeten the deal.

At the IMO, the chair tries to reach consensus. If he’s unable to then countries vote and the position with the most votes wins.

Other topics for debate at June’s environmental committee meeting include interim targets for 2030 and 2040, and whether and how to impose a carbon price on ship emissions.

Cost of a KitKat: Big brands leave sugar farmers at the mercy of climate extremes